Behind the scenes of the Heathrow Express Christmas Advert 2022

World-renowned Polar explorer Sir Ranulph Fiennes goes in search of Christmas on the Heathrow Festive Express. Want to know how to travel like Sir Ranulph, then read our guide.

The celebrated video of Sir Ranulph Fiennes OBE in which he announces he’s leaving the UK this year to head off in ‘search of the spirit of Christmas’ has been an industry acclaimed winner in the Christmas ad stakes.

In response to massive demand, we’re sharing insights into how the film was made – and how you can also follow in his footsteps to northern Norway – to hop on board the Arctic Train from Narvik, as seen in the video.

How was the video produced?

Heathrow Express’ PR team collaborated with London’s talented production company, Yada-Yada to pull together the concept with Sir Ranulph and his team of advisors. The most vivid memory which Sir Ranulph (or ‘Ran’ as he prefers to be called) speaks of being alone in the world’s most remote places, in extreme circumstances at Christmas time. Many of us can empathise, if away for work and apart from our loved ones.  We often forget that our bravest of explorers are no different.

The main element of the storytelling was the letter which Sir Ranulph had to write to his family. He wrote a letter to them on beautiful headed notepaper, saying that he was sorry he’d not be joining them for turkey and trimmings as he was off to the North Pole.  The most heart-warming message is that wherever we find ourselves, we are most comforted by being surrounded by love and goodwill.

The video featured the famous ‘Arctic Train’ which weaves its way through a stunning snowy Nordic landscape as it leaves the city of Narvik and the stunning St Pancras Renaissance Hotel. And Paddington Station, of course, platforms 6 and 7. Our home.

How can I discover Norway and Narvik in Sir Ranulph’s footsteps?

Travelling to Norway could not be easier; hop on board the Heathrow Express from Paddington to Heathrow airport. Book any of six daily flights to Narvik Evenes (EVE) airport via Oslo (OSL). Express buses to Narvik correspond to most of the flight arrivals from Oslo. Norway was recently voted ‘the safest country in the world to visit’. It’s also the best place to see the northern lights, now the UK’s number one bucket list activity. The Arctic Train is an unforgettable, 43 kilometre journey through a dramatic landscape which has significant historical links to the UK and World War II. To book, Visit Narvik | Winter

Where did the shoot take place?

The shoot was held at the stunning iconic St Pancras Renaissance Hotel, located 10 minutes away on public transport. It was specially chosen for its railway heritage and remarkable architecture - and because the hotel allowed our crew to film in the magnificent Chambers Club. The hospitality we encountered was second to none.

Sir Ranulph joined us for a pre-shot breakfast in the elegant Booking Office 1869 restaurant before holding us all spellbound with his astonishing tales of polar adventures, not to mention some really exciting travel documentaries and book releases. How does he fit it all in?

We filmed Sir Ranulph as he spoke about his upcoming adventures, not only travelling on our Festive Express, but also his future trips to far flung destinations beyond the Arctic Circle – a world which he’s very used to conquering. For example, we talked about the Arctic Train in Norway; a country which hold huge memories as many a fellow adventurer calls home.

The Hotel said: ''We are proud to partner with Heathrow, and specifically the Heathrow Express. The film stars Sir Ranulph Fiennes, 'the world's living greatest explorer', which aligns fully to the Renaissance values of exploration and discovery. We believe every trip is an opportunity to discover something wonderfully new, and the Heathrow Festive Express is just that!'' To book your event or stay, visit stpancraslondon.com

What does an adventurer carry, as luggage?

Heathrow Express are proud to partner with one of the world’s most sought-after British luggage brands, Globetrotter. Like Heathrow Express they are celebrating a big anniversary; us our 25th next year, and they their 125th.

We featured one of their Original Collection in the shoot, in a rich tobacco brown colour, very fitting for any budding adventurer to set off with, and like Ranulph, add to a collection of modern heirlooms. Even more interesting is that this suitcase was among the first to reach the South Pole and the top of Mount Everest.

This is your invite to book early for the Heathrow Festive Express, launching Monday 5 December, just in time for the holiday getaway.

Helping passengers get into the Christmas mood, Heathrow Express is transforming one of its carriages into an enchanting festive experience. The excitement builds as you’ll follow in the footsteps of the ‘world’s greatest explorer’ Sir Ranulph Fiennes, as he steps out on a Yuletide expedition to the North Pole aboard the Arctic Train in search of the spirit of Christmas. Where will your dream destination be this year?

What’s more, between 5th - 7th December, those travelling in the Christmas carriage can enjoy a joyful journey, with special festive treats including a Golden Ticket giveaway with a daily chance to win a £250 Harrods shopping spree!

Follow our Christmas elves as they guide you along the platform to a special carriage where twinkling lights and the sound of sleigh bells ringing as you step onboard the Heathrow Festive Express. You’ll be handed special cards to write your letter to Santa direct to Santa’s workshop while workers make sure they get posted.

As the train sets off, you’ll sit back, enchanted by racks adorned with vintage luggage, sacks full of presents, while fresh foliage adds that magical touch.

All aboard the Heathrow Festive Express 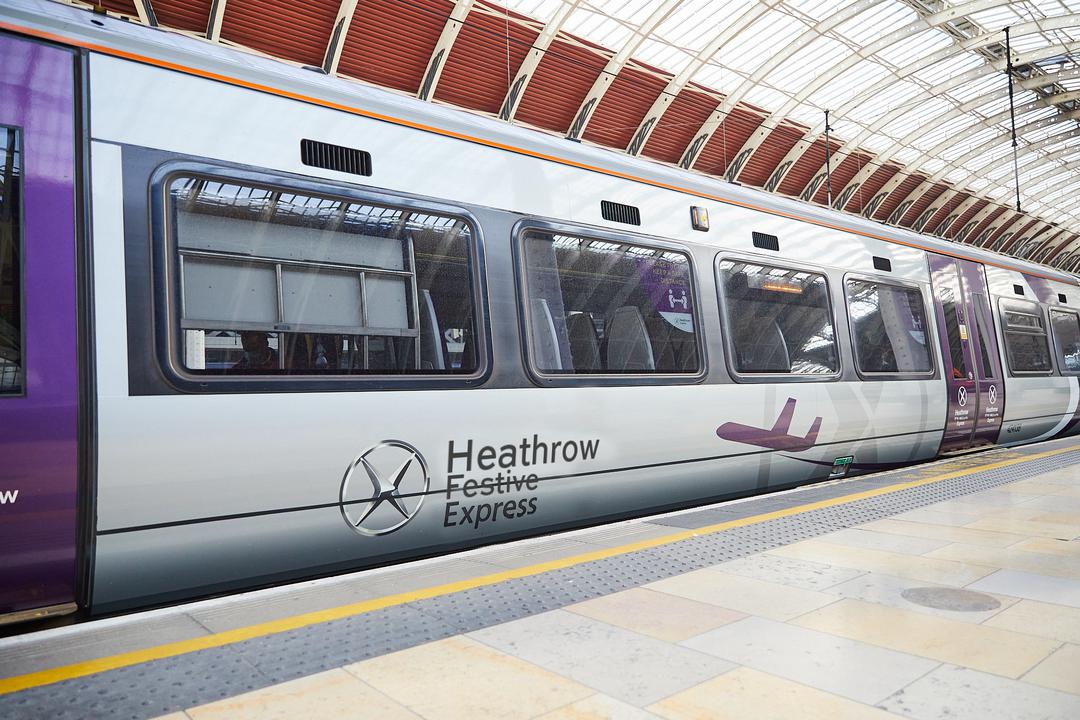 Helping passengers get into the Christmas spirit, Heathrow Express - the fastest route between central London and Heathrow Airport – is transforming one of its carriages into an enchanting scene, just in time for the festive season.

Between 5th - 7th December, those lucky enough to be travelling in the Christmas carriage can experience a joyful journey. Christmas postal elves will guide people along the platform to the carriage, where twinkling lights and the sound of sleigh bells ringing await as they step onboard the Heathrow Festive Express.

Once seated, passengers can immerse themselves in a carriage cascading with colourful baubles, loaded with letters to Santa, packed with parcels and rammed to the rafters with festive fun. Plus, special treats including a Golden Ticket giveaway and a chance to win a shopping spree will be on offer, just in time for the holidays.

Those wishing to travel on the Heathrow Express over the holidays can book tickets in advance from as little as £5.50. It offers a stress-free experience that takes just 15 minutes to reach its destination, as well as spacious cabins, free Wi-Fi, and an Onboard Entertainment system. Plus, kids 15 years and under travel free*, making a trip to the North Pole (or any other destination) even better value for money.

Trains to depart from Platform 7

Trains to depart from Platform 7

If you've travelled with us before you'll know there's usually at least one train on the platforms at Paddington Station, ready to board.

Until early 2021, Heathrow Express services from London Paddington will depart from Platform 7 only, between 05:00 and 21:00 Monday to Friday. This is while we work alongside Great Western Railway and TfL Rail to run more, faster trains to destinations west of London using the same number of platforms at Paddington Station.

Get on board sooner

Platforms and ticket barriers at Paddington station may be busier than usual, especially during peak times. To get on board sooner please stand back from the edge of the platform and allow other customers off the train before boarding. To make your journey faster, please have your tickets, contactless card or Oyster card ready when arriving at the station. Always touch in and out to pay the correct fare including if ticket barriers are open.

If you’re travelling from Terminal 5 there will always be at least one train ready to board. Please see departure screens or a member of the station team to board the next service.