Beer aficionado Pete Brown shares his favourite pubs in the capital. What could be better in the depths of winter than to retreat to a cosy a historic pub and enjoy a glass or two to warm you?

Home – probably – to the greats of English Literature

What’s it like? London’s last galleried coaching inn is tucked away in a former railway goods yard. Long before the railways even, the pub once covered the whole quad – but the remaining buildings alongside are still magnificent, with wonky wooden galleries looking down on the drinkers below. Inside, a choice of three bars gives you everything from the cheery warmth once enjoyed by coachmen, to the dining room frequented by their well-to-do passengers. Both Shakespeare and Chaucer drank nearby and could well have popped by. Love that Dickensian vibe? There’s no better pub in London.
Who goes there? A mixed bag of city workers on their way home, locals and adoring pub enthusiasts.
Why I love it: It’s a great survivor. Other historic pubs can become tacky theme parks, but this one simply carries on doing what it’s done for 600 years, without fuss. 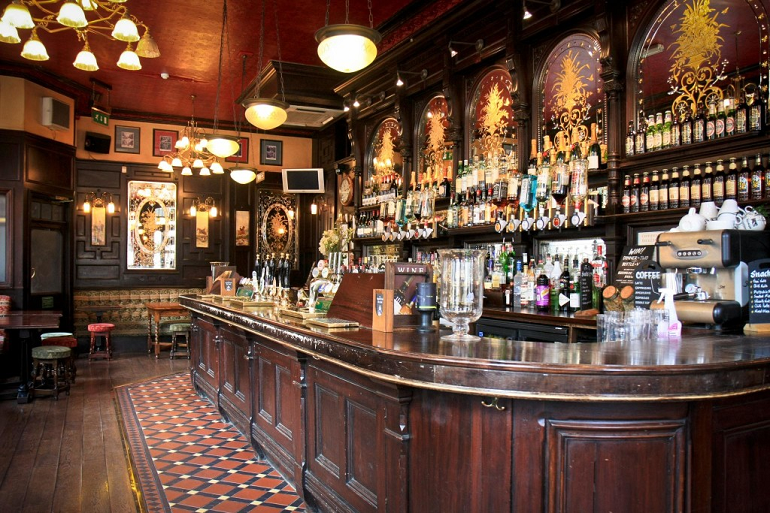 What’s it like? When I first drank here in the age before Google Maps, I had to be shown through a warren of passageways leading from Knightsbridge around the backs of buildings to a perfect cobbled mews that didn't seem to lead anywhere. The pub allegedly invented the Bloody Mary, and it was once the Officers’ Mess for The First Royal Regiment of Foot Guards. A red guard box still stands outside. A perfect respite – in every way – from posh shopping.
Who goes there? Old Knightsbridge – people with money who don’t feel the need to flash it.
Why I love it: It’s like finding a pubby Narnia in the middle of Knightsbridge. Some people won’t even believe me when I tell them about it.

What’s it like? In summer the front opens up into its narrow courtyard and it feels strangely like it ought to be by the seaside. In winter, the hatches are battened down and the place glows. But the wooden-slatted walls and low ceilings still spirit you away, transporting you far from the city outside. The beers – mostly from London brewery Fuller’s – are perfectly kept and served by people who know their way around them.
Who goes there? A mixed crowd, including anyone who works in the beer and pub industry who happens to be nearby. This is a pub that pub people rate highly.
Why I love it: Most pubs in this part of London cater ruthlessly to tourists and theatregoers with a lowest common denominator facsimile of ‘the Traditional London pub’. This is the real thing.

The Best Country Pub in the City

What’s it like? This 16th century pub makes a pretty strong claim to have hosted everyone from Dick Turpin to Charles Dickens – in fact, he refers to it in The Pickwick Papers. It’s just across the road from Hampstead Heath and it has a dog washing station in one of the outbuildings. Inside, Rover can dry off by one of the roaring fires, enjoying a fine selection of gourmet doggy snacks while you choose from the excellent range of real ales and craft beers.
Who goes there? Dog walkers from the Heath, and a regular smattering of familiar faces from TV.
Why I love it: The perfect place for lunch on New Year’s Day – especially rewarding if you force yourself into a bracing walk to clear the cobwebs beforehand.

The Jewel of Hatton Garden

What’s it like? Even though it’s clearly signposted from Hatton Garden, the Mitre can be difficult to find down its narrow alley. Elizabeth I reputedly danced around the pub’s ancient cherry tree with Sir Christopher Hatton, and Guy Richie featured the pub in his move Snatch. Today the ancient wood-panelled walls, tiny rooms and endless nooks and crannies never fail to fascinate and pull you ever deeper into the pub’s comforting embrace.
Who goes there? Those mysterious people who clearly work for a living but seem able to pop out and hide in the pub for a few hours in the middle of the afternoon.
Why I love it: It’s so eccentric. At first glance a pub like this shouldn’t ever work – but of course, that’s exactly why it does.

Pete is the author of several books on beer, cider and pubs. Find out more on his blog.